Mr. Wells has extensive field experience as well as Emergency Response & Recovery Operations and 10 years Pentagon experience at both the Secretariat and Staff levels. He currently provides operational planning and support for the Federal Emergency Management Agency (FEMA). He was responsible for managing budgets ranging from several million to $30 billion. He served as the FCO for approximately twenty-five (25) man made and natural disasters both in the United States and its territories.  He has extensive operational experience in disaster management and emergencies of all types and sizes to include major hurricanes--one of which was catastrophic (Katrina)--and unique operations (Columbia Shuttle Disaster).  He has served as an FCO for every recurring type of disaster.

• President's Senior Federal Official in the field at disaster sites.

• Instructor and subject matter expert for Department of Defense

• Doctrine development for the Department of Homeland Security

• Liaison between the Department of Defense (DoD) and Director

• Principal military advisor to the Director of FEMA, charged with

facilitating, within FEMA, an understanding of DoD's policies,

plans, and programs and DoD

to several domestic operations such as the 1996 Olympics,

fires and smaller hurricanes, and classified

• Facilitated a resolution of problems between FEMA and DoD on

the execution of the Chemical Stockpile Emergency

• Facilitated resolution of problems between FEMA and the

the National Guard in scenarios involving weapons of mass

• Served as the DoD representative for the development of the

• Completed a MOU with the Bureau of Prisons, which saved the

• Provided interface and continuity between the Army military staff

including operations in Iraq, Rwanda, and Haiti and much,

• DOD Course on Domestic Preparedness Against Weapons of

• Army manager for the Army Shelter for the Homeless Program

Management Teams at Headquarters, Department of the Army

• Federal Executive Board Award for "Intergovernmental

Cooperation" awarded for performance of duty during the 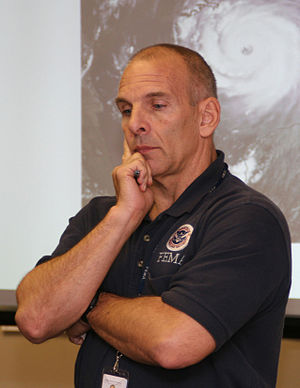