Colin Baenziger has a Master's Degree with Distinction in Public Administration from Cornell University's Graduate School of Management and a Bachelor of Arts degree from Carleton College. He is active in the International City Management Association, Leadership Palm Beach County, the Palm Beach and Broward County Leagues of Cities and ArtServe. With his expertise in municipal government, he has been called upon to speak at the conferences of the Florida League of Cities, the Florida City/County Managers' Association and the Florida Public Personnel Association.

Mr. Baenziger is a student of local government and is responsible for the overall operations of Colin Baenziger & Associates.

He has recently completed several significant executive search efforts for numerous Florida local governments. Other significant assignments include: served as the interim manager for the new cities of Wellington and Islamorada during their start-up phases, conducted a planning study of the fiscal impact on the City of Palm Beach Gardens of several development scenarios for its western-most 7,100 acres (the work resulted in a realistic assessment of what type of development would be required if the development was to "pay for itself" in terms of city services), completed an organizational review of the government of the City of Lauderdale Lakes that led to the City changing its form of government to the Council-Manager plan. Mr. Baenziger also worked with a citizen's advisory committee in drafting the necessary changes to the city charter,.

For Palm Beach County, he conducted a review of the disposition of impact fee waivers granted to Utility Development Company by the County's Water Utilities and Utility Development Corporation (UDC) to determine how many of the 29,405 waivers granted to UDC in the late 1970's and early 1980's had been utilized by 1998. The work found 29,402 waivers and saved the County almost $20,000,000,' to "As a result of our efforts, the County eliminated almost $20,000,000 in liabilities.

You can reach Colin at cbaenziger@municipalsolutions.org 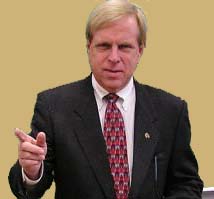